Martha, Vintage Trifles
Salem, Oregon, United States
I love taking bits and pieces from the past and creating something new to enjoy. A tiny piece of lace or an old picture is my inspiration. I think if these elements could talk, they would have such an interesting story to tell. 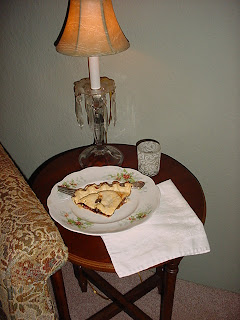 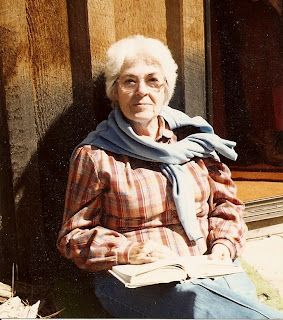 Since it is the holiday season, I was going to share a story with you and show you a picture of a piece of pie that my mom made. This has been a special piece of pie as it is from the last pie that my mom made before she died over 10 years ago. Yes, 10 years ago. Christmas of 1996, my mom made her traditional cranberry pies. My sister placed one of them in her freezer. Mom passed away in April. On my sister's birthday in October of 1997, she said lets thaw the pie and have it instead of cake. What a great idea! Well we thawed the pie and sat at the table with the pie in front of us. We just couldn't bring ourselves to eat Mom's last pie. How could we preserve it? So I came up with the bright idea of trying to dry it in my food dryer. What did we have to loose? Well, I dried two pieces of the pie for 3 weeks. They were dry, but still looked like a pretty fresh pie. I didn't want it to get damp so I sprayed the two pieces numerous times with an acrylic spray sealer. It worked like a charm. We stored them in a plastic container with silaca gel in the off-season. So for the past 10 years, my sister and I have each had a piece of Mom's cranberry pie to place on a special plate to display throughout the holiday season. Until today. Today, my beloved Miss Zoe ate Mom's 10 year old, plastic covered, cranberry pie. I was devastated. Then I was worried that Zoe might be in some danger so I called the vet. The vet was rather entertained by the whole story and asked what kind of pie it had been. She said it wasn't something that they had covered in veterinary school, so just watch her and make sure that everything that goes in, comes out. I assured her that Zoe had munched on it and hadn't swallowed it whole. There were crumbs strewn about. I finally got the nerve to call my sister and tell her the bad news. She was almost as speechless as the vet. Then she offered to cut her piece of the pie in half and share it with me. What a great sis I have. I said no - just make sure she wills it to me. I know her piece will be safe. She has no pets and stores it under a glass dome. Glass dome ?!? I have several of them and it never occured to me to store my pie under one of them. Whether the glass dome would have discouraged Zoe, we will never know. The good thing is - yesterday after decorating the house - I took a picture of the infamous pie. I was going to share the story of Mom's traditional cranberry pie with all of you. I guess I'm still sharing the story, just altered somewhat. I don't have the piece of pie, but I still have the memory of the day my mom and I made that pie. So here is a picture of the pie (before Zoe) and a favorite picture of my mom.
Posted by Martha, Vintage Trifles at 7:22 PM

That is one weird story, Martha! Your mom's picture is beautiful and I see where you resemble her. Zoe is funny, naughty girl. I'm glad you have the picture of the pie. That could be used in an altered art form and I know just the artist who will embellish it beautifully. Get to work!

Loved that story, Martha. What a special memory and now your story is even better thanks to Miss Zoe.

Ok, I know its sad that you lost the pie, I hope you're not offended...but its a really funny story...drying and sealing it...I would have never thought!Laurie

I've never heard a pie story quite like that before!! What a memory to hold dear and hopefully laugh about someday.

Martha...I agree with Lisa, your story is even better now that you can add Zoe to it. Maybe you and Ellen can share the pie she has...maybe trade off years!!!

What a wonderful story to share this time of year when some of us need a "good memory" to dwell on...Thank you...I do hope you carry the tradition of making cranberry pie.